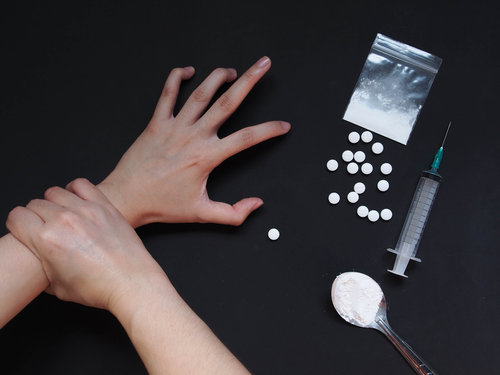 Alcohol has been named the most commonly used addictive substance in America. Due to the substance’s accessibility, many people struggle with alcohol dependence and addiction.

Inhalant addiction isn’t as prevalent as addictions to other substances; however, it is extremely serious. Some commonly abused inhalants include paint thinner, aerosol sprays, and nitrites.

Crack and cocaine are both derived from the coca plant native to South America.  The difference between these two substances is in the production. Cocaine is a white powder that can be snorted or injected, while crack is a hardened, crystallized substance that is typically smoked. Crack is made from cocaine, by boiling water and baking soda then cooking it with the cocaine. So, they are essentially the same drug, but in different forms and with different applications.

A 2015 study reported that a number of Americans, ages 12 and older, had used methamphetamine, or meth, at least one time. This stimulant elicits a 6-16 hour high and can be used in many forms: crushed, smoked, inhaled, injected, snorted, or swallowed.  The long-term effects of crystal meth – even after treatment – include memory problems and emotional distress.

It goes by several different names: Mary Jane, reefer, weed, pot. But all of these nicknames refer to one plant-based drug known as “marijuana.”  While the drug is not considered addictive, marijuana should be avoided by those who suffer from schizophrenia, as marijuana use can worsen those symptoms. It can also lead to an increase in appetite, lower blood pressure, and increased heart rate.

Amphetamines are prescription stimulants, such as Adderall, and have a high likelihood of abuse. Prolonged, unprescribed use can lead to psychological distress and severe heart conditions.

Heroin addiction is among the leading causes of death in the United States as addiction often leads to overdose. This highly addictive opioid is often injected but can also be snorted or smoked. Recent overdose deaths have been linked to fentanyl-laced heroin. Fentanyl is an extremely potent synthetic opioid that is over 50 times stronger than morphine.

Opioids are the leading cause for overdose deaths in the United States. Since the 1990s, Americans have been embattled with the “opioid epidemic.” Opioids fall into three categories: Natural opiates, which include morphine and codeine, Semi-synthetic opiates such as heroin and Oxycontin, and fully synthetic opiates like methadone and fentanyl. Opioids are the most lethal due to their highly addictive nature and potency.

Founded by members of the recovery community who have gone through, and overcome, addiction themselves, Rehab Carolinas staff is passionate about helping others achieve the freedom from drugs and alcohol that they have found. With both professional and personal backgrounds in recovery, our staff’s unique approach is focused on helping patients truly heal.

All of the Carolinas.